A couple of weeks ago, my mum and I were channel-hopping of an evening, when we finally settled on one of the Food Network’s low budget, off-peak shows (you know the ones I mean..?). A very brief scene featured popovers: light, hollow Yorkshire pudding-esque creations, in this instance laced with lashings of cheese! Naturally, we thought these looked and sounded delicious, in spite of their name (my children at school refer to passed wind as ‘pop-offs’; I failed to avoid the unpleasant mental association!). A little online research informed me that they are quite commonplace in the States, but not so here in the UK. So, last weekend Mum and I decided to give them a whirl, and now here I am sharing our results and conclusions with you... 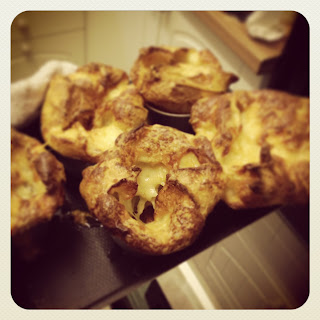 The trick to getting these to rise sufficiently is not to over-beat any of the ingredients, and to add the finished batter to preheated tins straight out of the oven. 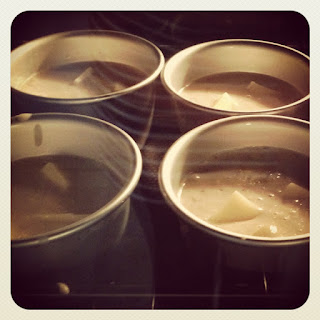 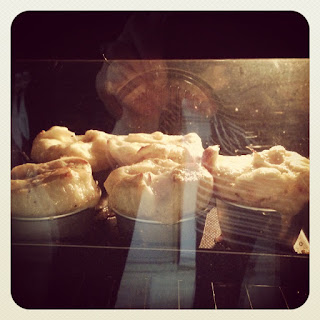 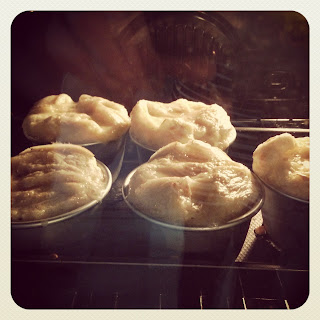 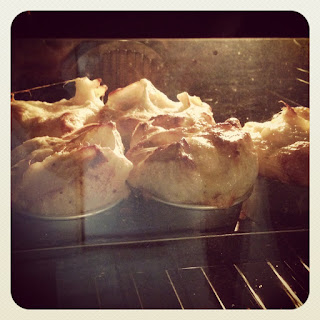 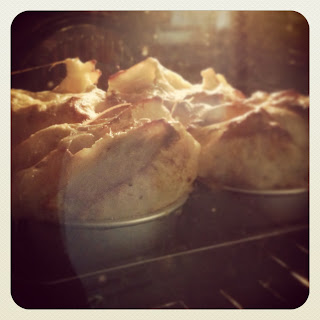 Not bad for a first attempt! Let’s say it demonstrated tremendous potential for future incarnations...

This time around we had insufficient batter for the 6 tins we used, so only made five popovers, and they would have been better if we'd only made four. Next time, I would use one and a half times the ingredients for 6 popovers. Also, above, I have doctored the oven temperature and cooking time, as our oven was too hot at 175°C, and they were overdone after 40 minutes ~ the original cooking time was 45 minutes to an hour! Keep a close eye on them and go with your instinct; we held off taking them out after 30 minutes, when we should have trusted our own judgement rather than sticking rigidly to the recipe.

We really enjoyed the popovers, which we served with a green salad of watercress, spinach, rocket, grated courgette and cucumber, seasoned and dressed with just a dash of light honey and mustard dressing. They were very light and tasty, but we feel they would benefit from a stronger cheese flavour (we are total cheese monsters, so we like things to be über cheesy). I would suggest using a mixture of an extra strong vintage cheddar for punch, and a French Comté for nuttiness, in place of the Gruyère. We also think a couple of teaspoons of Dijon mustard in the batter wouldn’t go amiss… I’ll definitely be making these again, and I will update the recipe here once I’ve perfected it!

I would really welcome any comments or tips, especially from my readers in the USA with experience in the popover department!