Having wanted to bake one of these for what feels like an awfully long time, it was such a joy to finally get around to it this weekend, and now I am very happy to share that joy with you all!

I first had the inclination to try my hand at this a couple of months back, when I was offered Mr Kipling's incarnation of the traditional angel layer cake. His version is not true to original recipes, lacking as it is in the plain sponge department, and tastes, like so many other shop-bought baked goods, mildly synthetic. It was nevertheless tasty, and so I resolved to bake one for His Lordship at the first opportunity. There is something undeniably nostalgic and really rather kitsch about this cake ~ the density of it, its appealing vintage fairground colours, the subtle vanilla sweetness of the unctuous buttercream... Salivating much?

I must confess that I cannot take any credit whatsoever for the recipe that follows, as I found it (having trawled the internet for some time, dodging recipes for angel food cake - a different confection entirely) on a lovely blog by the name of Nom! ~ thank you, Nicola! My only tweak to the recipe was that although the icing between the layers is only intended to be minimal, I found that with the increased surface area of my cakes (see the tins I used below) I needed a double batch of the buttercream. 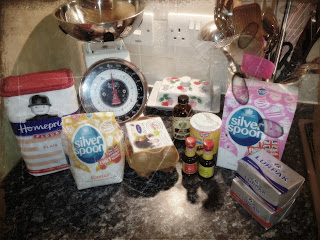 2. Cream butter and sugar until light and fluffy.

3. Break in two eggs, half of the flour, baking powder and vanilla (sifted), whisk, and repeat with the other half. Now add the milk and whisk into the mix. 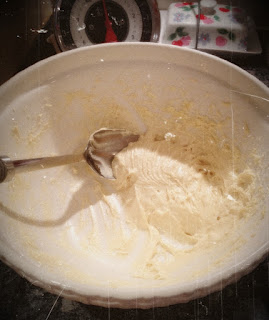 4. Take a third of the mixture into a seperate bowl and add either the pink or yellow food colouring until you get the desired depth, remember, it's 'angel' cake, so don't make it too strong. 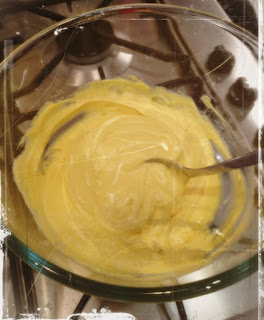 5. Take another third in another bowl and mix in the other colour. 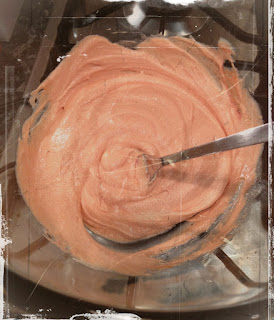 I couldn't get pink, so used a little red food colouring instead. This wasn't ideal, as it turned out: the final result was a somewhat insipid salmon, rather than a lovely candy pink.

6. Now grease and line a loaf time, three if you have them. 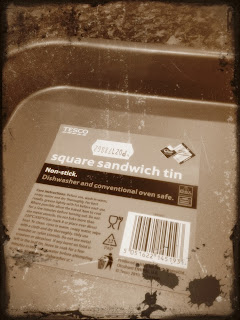 I used square sandwich tins instead... 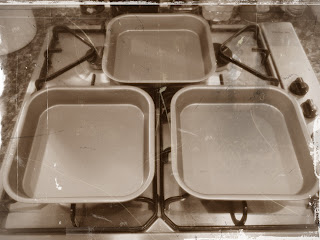 7. Divide the mixtures into the tins and bake in the oven for about 25-35 minutes. Check with a skewer to make sure its cooked perfectly.

9. Once cool make the buttercream by whisking together the butter and icing sugar, you can add some more vanilla extract to this for an extra kick of gorgeous if you want - I did.

10. Level the three layers and stack with a layer of buttercream between the layers. 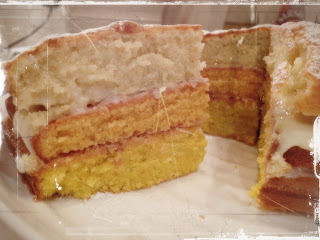 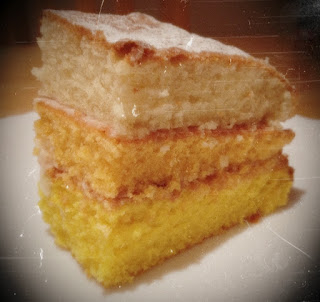 This really is such a deliciously simple treat to make, and looks effortlessly impressive served in a neat little tranche with a cup of tea. I do hope you'll be inspired to have a go yourselves ~ perhaps you could experiment with the colour combinations? Blue, lilac and pistachio green might look pretty..? Let me know how it turns out!